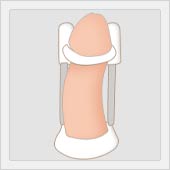 Probably the best ratio between price, aggressiveness and effectiveness of the treatment still remains in the field of approaching Peyronie’s disease and other curved penis problems with penis extender specially adapted for this kind of treatment. The only downside of it being, it takes time and therefore patience to reach a satisfactory result.

The device can be medically prescribed by the personal physician, urology specialist or the patient can buy it by his-own initiative.

The device works in the same way as a normal penis enlarger that is used to attain a bigger penis. It is applying traction to the penis in the longitudinal direction and thus forcing it to stretch and consequently to grow, but at the same time, it is applying grater force on the shorter side and so pressuring it to correct the curvature. The shorter side will thus be stretched harder to elongate it a bit more. While this might seem a painful or at least uncomfortable procedure, the penis accustoms it-self to the constant pressure quickly and the patient does not feel annoyance after a short adaptation period.

Different reports and studies have shown that stretching devices can partially correct congenital or acquired curvatures like Peyronie’s up to 40%; though, this procedure requires patience and discipline, as the device has to be used for several months. Absence of side effects makes them a good alternative to surgery. In some cases of less severe curvatures, penis extenders can also produce an additional penis enhancement.

Use and Side Effects of Penile Traction for Peyronie’s disease Treatment.

The amount of time men should wear a penile traction device  depends on the advice of their physician and the brand of device used. However, for best results men are generally asked to wear the device for at least four hours daily with a 20-minute break after the first two hours. Gradually they should increase the length of time wearing the traction device to 8 or 9 hours with breaks every two hours.

This schedule may be difficult for men, depending on their lifestyle and work schedule. Except for getting used to having the device attached to the penis, the only side effect is itching.

Pain during erections usually improves within one to two years, but the scar tissue and curvature often remain. In some cases, both the curvature and pain associated with Peyronie’s disease improve without treatment.

Quickly and Easily Straighten Your Penis, Reduce Discomfort & Improve Your Sex Life With The ONLY Medically Backed, Non-Evasive System Available!

Medically backed and clinically tested, Andropeyronie is rated by many as the fastest and easiest way to help Peyronie’s Disease and/or correct penile curvatures – fast. In fact, the Andropeyronie device was originally developed precisely for this reason.

Diagnose your condition – Do you have Peyronies Disease or a curved penis? (There is a difference.)

Peyronie’s is a penile curvature which is created as a result of a lump (otherwise known as a plaque) which is made out of something similar to scar tissue.
The lump forces the penis, whilst flaccid and/or erect, to bend to one side and can in some cases be painful or uncomfortable. Depending on the severity of the curve, this condition can make sex difficult, and in some extreme cases, impossible.

Both can be successfully treated with the Andropeyronie device to ensure the quickest results in the shortest possible time.
In fact, penis extenders like the Andropeyronie device have been used by real medical professionals to help thousands of men the world over straighten their penis, making them look longer, straighter and more impressive!
ANDROMEDICAL will help you to:

Conclusions
PTT and VED represent viable therapeutic options for managing PD, with more data currently available on PTT. Because all PTT studies used a similar style of traction device, it is results reflect outcomes of these particular devices (andropenis) .

There is a commercially available penis stretch or traction devices for Pyronie´s Disease: andropeyronie extender ( like andropenis) .The devices consist of parallel rods connected to two padded rings, one proximally at the base of the penile and a second distally underneath the corona. Pnnis traction therapy Penis traction therapy is performed by holding the penile in a small frame and applying a gentle, but progressive, traction force on it, which can be accomplished by the addition of small metal extensions to the parallel dynamic rods and frame for certain time periods.